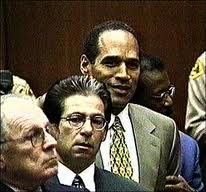 On this day in 1994, two people were brutally murdered in an upscale suburb of Los Angeles called Brentwood. One was a lady named Nicole Brown Simpson and the other was her friend, Ronald Goldman. They were slashed to death (Nicole was nearly beheaded).

Despite the fact that virtually everyone familiar with the case knows who did it, no one has ever been convicted of the crime.

There is a mountain of evidence of every kind, including irrefutable forensic evidence, to show that  her ex-husband, former football player and movie personality, OJ Simpson, was the perpetrator.

His blood was found at the crime scene, an article of his clothing was left behind, the blood and  hair of the deceased, and fibers from their clothing, were found in his car and in his home. His car was seen leaving the scene (although that evidence was never introduced at trial) and footprints in the blood of the butchered pair matched his shoes.

He had a documented history of physical spousal abuse of the victim. After the murders he tried to escape. Initially flying to Chicago, and later as he was about to be arrested, fleeing in his car. A long car chase  ensued which was watched on live TV by half the country. He had a disguise, his passport, and many thousands of dollars of cash on him as he tried to get away. Wonderful entertainment.

His trial was the top entertainment event of the year, perhaps the decade. Many, many people and companies got wealthy off the tragic spectacle. Twelve people on the jury decided to let him off scot-free. It has been speculated that it was because of past judicial injustices based on racial prejudice. It's almost certain that the prosecution's case was lost during jury selection. No one in history (before or since), has ever been acquitted with as much evidence against them.

Simpson himself was shocked  to have gotten away with it. The rest of the country, including his lawyers, were equally shocked. The picture above captured the exact moment when the verdict was announced. The look on the faces of his attorneys tells it all.

Some people, for reasons of their own, or because they belong to some political  or racial clan, pretend that they believe he was innocent. But no one, in their heart of hearts, actually thinks he didn't do it. Some however, believe that justice was done, even if a hideous murderer went free.

It's terribly wrongheaded, even if intellectually understandable. It remains one of the darkest stains on the national conscience. Setting a guilty person free to atone for convicting an innocent one is a preposterous notion.

Just about everyone reading this already knew everything printed above. But just in case a younger reader has not been told, I felt compelled to restate the sad tale. Sorry, no punch line or attempt at a clever ending to today's history. Just bewilderment with the human condition.
Posted by Grant Davies