Danny Was a Late Bloomer 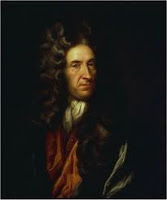 On this day (-1) in 1703, a crowd jeered as the London Constabulary led a rather motley fellow to the pillory (what we in America called the public stocks - "put your hands and head in the hole in the board please").

We said the guy was motley because of his description in the police report.  In modern English and modern police work it ran something like this - "medium height; bent frame, about 40 years old; swarthy complexion; a crooked nose and a large mole near his mouth."

So....motley, friendless, and failed (and also in debt), he was locked in the pillory.  The crowd picked up rocks, mud and er...let's just say other odorous items....in preparation of flinging at said felon.  As they moved closer (to get a better shot), the prisoner shouted that he would recite "A Hymn to the Pillory."  He then proceeded to make up a poem - line by line - and the crowd loved it.  He was an instant hero.

Released, he sensed writing could be his destiny. He tried a couple of topics but was happy with none of them.  For nearly twenty years, he remained happy with none of them.  Then he heard about a castaway sailor named Selkirk being rescued from an isolated island after being marooned for years.  That's the stuff, he thought - so Daniel DeFoe wrote something called "Robinson Crusoe" - then "Moll Flanders"; then - oh you get the point....

To mark the day, remember to note to the authorities that sometimes the pen is mightier than da pen....or even the pillory.  (Oh yeah!  Try to convince someone that you too are a late bloomer.)