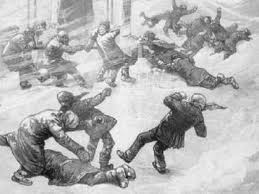 On this day (-1) in 1888, America was moving through what looked like just another day. There was a lot of talk about politics, trading partners and the economy. The political exchange had begun to turn ugly. And, the stock market was confused by the whole thing and was very shaky. But that was years ago.

Anyway, spring was in the New York air. But, on this day, the temperature began to drop sharply on the East Coast where most folks lived. And, in a matter of hours the winds whipped up and winter weather was back. The cold snap collided with a coastal rain storm. Then as temperatures plunged, it quickly turned to snow.

It started as flurries. Then in growing, biting winds the snow began to fall. The meteorologic oddity became a blizzard. Over 40 inches of snow swirled into 50 foot drifts as phone lines fell. More than 400 people died in the streets. The city ground to a halt.

Only sixty-one members made it to the floor of the NYSE. With phone lines falling and clients snowed in, they only managed to trade a measly 15,000 shares in a couple of hours. As the weather worsened outside, they decided to close early and see if they could make it home.

The storm continued to intensify with wind gusts of 80 mph at times. The next day was even worse. The NYSE remained closed. More importantly to the city’s citizens, the police and fire departments became virtually inoperative. Several buildings burned to the ground un-addressed, with the flames fanned by the gusting winds.

They couldn’t even call for help from outside. All contact beyond 5 miles was lost. But it was the age of American ingenuity. So police, hospitals (and brokers) sent messages by under ocean cable to London. There they were re-transmitted by underwater cable to Boston. Thus, help was sent to a New York - - paralyzed by The Blizzard of '88.

Thanks to Art Cashin and UBS for permission to re-publish this article. It's nice to be able to have a day off to play golf in sunny Florida.
Posted by Grant Davies