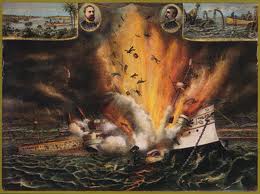 On this day in 1898 a curious thing happened in the Havana harbor. An American battleship named the USS Maine blew its top (and bottom too for that matter) and 260 crew members were launched into history.

The US Navy decided that the explosion was caused by a mine and kinda blamed the Spanish who owned Cuba at the time. Back in those days there was a curious practice that the US couldn't go to war without congress declaring it because of the provisions in a now largely disregarded document called the constitution. How quaint for them to actually use it.

Anyway, the war drums got beaten and so did the Spanish in the war that started barely a month later. One of the participants was a guy named Theodore Roosevelt who got famous for charging up a hill in San Juan without breaking his glasses or a sweat.

Teddy, as he came to be affectionately known, had a stuffed toy bear named after him which coincidentally first went on sale on this day a few years later, in 1903.

Although it was later determined (in 1976) that the big bang was caused, not by the Spaniards, but by a fire on board that lit the fuse on the ammunition stocks of the ship, Teddy still went on to become President, the US ended up with a bunch of Spanish stuff, (like Puerto Rico, Guam, and the Philippines) and I'm pretty sure that people in Spain are no longer pissed at us.