The Country Has an Alien Problem 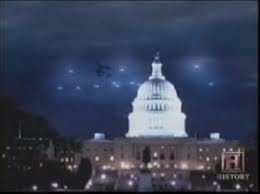 On this day (-4) in 1952, Washington D.C. was abuzz about the risk of a change of leadership. No…..Mr. History Major....it was not because Eisenhower was nominated by the Republican Convention (that event occurred eight days earlier). No…..Jeopardy Aspirant…..it was not the surprise of the Democrats nominating Adlai Stevenson over that chalk bet - Sen. Estes Kefauver (that event would not occur for eight more days).

Okay, you say! (You are rather impatient aren't you?) Who the hell were they worrying about as a replacement for President Harry S. Truman? The answer to any logical adult was....aliens. Er…..Do you mean aliens as in outer space and the supermarket tabloids? Yes, you dolt! What other kind of aliens could take over the most powerful nation in the free world?

So…..when the radar screens at National Airport showed a bunch of bogeys over the White House, things began to percolate. The radar images (about a half dozen) seemed to be cruising in a circle at about 150 miles per hour; above the President's House (actually Truman wasn't there). When air traffic control asked pilots in the area to report…..several reported very bright lights above....where else....the White House.

When one plane moved toward the area, three of the blips took off at a speed that showed up on the screen as 3000 mph....faster than any known plane. When the Air Force finally scrambled planes to the area....the remaining blips had left at the same incredible radar speed. The nation's press became alerted by the police calls and air traffic calls. The Air Force tried to pooh-pooh the sightings.

Later that week, however, there were similar sightings at a secret military facility south of Georgia. On July 25, the mysterious sightings came back to Washington. This time there was only one. An Air Force jet was scrambled but as it tried to near the object, radar screens showed the object pulling away at two times, four times and finally seven times the jet's fastest speed.

The Pentagon called a major press conference to respond. The sightings were "weather inversions" they said. "We could prove this to you but to do so would force us to reveal secret equipment which we might have used to prove this. And that secret equipment (if it existed at all), could be vital to the national security. So just trust us….we're certainly not the kind of people who'd trick you.

For gosh sakes, next thing you know you folks will think we're the type to conduct nuclear experiments on folks without telling them....come on folks….this is America in the 1950's."