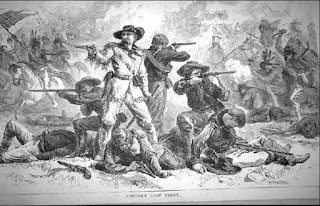 On this day in (-1) 1876, an aging Boy Wonder tried his best tactic one time too many. Fourteen years earlier he had become the nation's youngest Brigadier General at age 23. But that was the Civil War.

Some even said he was "Grant, in a saddle." His opponents said, "The damn fool doesn't know when he's beaten, all he knows how to do is attack." In several charges he had his horse shot out from under him only to find a new mount and lead a new charge.

But when the war ended, the Union Army decided to prune its ranks, bloated with officers. He became a captain but soon rose to Lt. Colonel in the Indian campaigns. This would be a chance to recoup his former glory (and an outside shot at high political office, maybe even the presidency).

So, when the order came to move the Sioux out of some potential gold territories, he sensed his chance. And, when Crazy Horse defeated Gen. Crook at the Battle of Rosebud River on June 17th, the chance for fame loomed larger than ever. He split his force in three and moved his unit into Southeast Montana. There, a scout sighted a small Indian village. The scout had not been to an ophthalmologist in some time, unfortunately, and had clearly flunked out of "census school." The small village was almost the size of Chicago and looped all around the Little Big Horn.

Nonetheless, Lt. Col. Geo. Armstrong Custer decided not to wait for the expected reinforcements. He chose to go with his signature tactic, the frontal charge. Unfortunately, Crazy Horse had read Custer's press reports and therefore, surrounded this unit of the 7th Cavalry - forcing them to dismount and stand.

Thus the man who had been the Nation's youngest Brigadier General and all 265 of his men died at this last stand. (Ironically the only survivor was a horse belonging to an aide to Custer. What made it most ironic was the horse's name….."Comanche.")

To celebrate drop by the Little Big Horn Lounge and talk to a couple of ticket scalpers and sip some "Three Feathers" on the rocks. But bring cash - they don't like people who charge.

Editors note: For more about this event you may want to revisit an earlier offering; How Curley Kept His Hair.