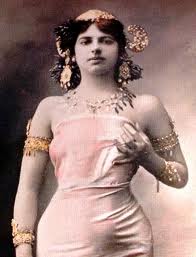 On this day in 1917, it all ended badly for Margaretha Zelle. She was made holy, or more correctly, full of holes, by a French firing squad. She went to her reward with eyes wide open, literally, because she bravely refused the blindfold she was offered.

Margaretha was a Dutch girl who came from Holland to France in 1905. Once there she changed her persona to that of a Malaysian beauty who had been born in an Indian temple and was taught how to perform ancient dances by a high priestess.

It was a great story and she quickly made a name for herself by dancing to packed houses of men anxious to expand their knowledge of exotic foreign cultures. She named herself Mata Hari. It was a nice touch.

But the truth was the men came to watch her dance out of her clothing. You see, she was a stripper and naked women never go out of style among such audiences. She performed all across Europe.

She also did performances of a different kind to audiences of one. She became a courtesan, which is a fancy word for a hooker who has wealthy clients. And by the time the war to end all wars was heating up she had quite a number of high ranking military officers on her list of Johns.

It seems they whispered a number of military secrets to her while she was whispering sweet somethings into their ears. So she expanded her product line to include espionage, selling info (mostly of the useless variety) to both the Germans and the French. I'm told that can get you into trouble.

So with the war going badly for everyone, and both sides discarding most of what she told them as unreliable, she became a convenient scapegoat the French could use to distract the populace from focusing on the fact that hardly anyone was coming home from the front, except in a box. So they had her arrested and convicted, and they filled her full of holes.

It's hard to guess what she might have been thinking when she refused the blindfold. It may be her final thought was that when you make your living giving people an eyeful, you don't want to miss a thing at your final performance.