Lawn Chair Larry, Mach Man, and the Queen of the Mist


Today's story comes to us from a guest writer. But don't fret, we only allow the very best writers to be published here. After all, we have high standards to maintain and can't let just anyone stumble in off the virtual street and start banging out historical accounts without checking out their credentials.

As it turns out the author has great skills as a litterateur. She is also genetically qualified by virtue of being one of my wonderfully talented offspring. Which only proves that even a rotten tree can produce some terrific apples.

The following article will be published this morning on the Cecil County Library site and has been edited somewhat to fit our genre and to remove some information of interest only to patrons of that institution. 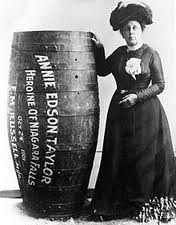 
When I heard that a man would free-fall from the edge of outer space in order to break the sound barrier, my first reaction was that we had another Lawn Chair Larry on our hands.

“Lawn Chair Larry” Walters was a Californian who strapped 45 weather balloons to his patio lounger, dubbed it Inspiration I, and attempted to fly 30 feet above his home. Once he reached 16,000 feet, I think he was mighty thankful for that Miller Lite and sandwiches he prepared for his leisure cruise.

Now, I’m not a scientist, but even I can see that his landing strategy – shooting the balloons with a pellet gun – was a bad one. Fortunately for him, he didn't quite meet the qualifications for the Darwin Awards.

But no, Felix Baumgartner – who I affectionately refer to as “Mach Man” – was no Lawn Chair Larry. Every angle and precaution was taken when he took the plunge from a helium balloon just two Sundays ago. Diving 23 miles and reaching 833.9 mph, he made history: the first man to create a sonic boom without being inside an aircraft. If you missed the live video feed on the internet, check out YouTube for a replay. It’s mind blowing.

But today we celebrate the anniversary of another bold dive. Today, 111 years ago, on her birthday, a 63-year-old named Annie Edson Taylor made a name for herself – “The Queen of the Mist” – when she decided to improve her station in life with a feat of daring. Annie plunged down Niagara Falls in a corked, 160-pound barrel and lived to tell the tale, though the achievement arguably gave her a bigger headache than bank account.

Even though she lived the best part of another twenty years, she never had much financial success cashing in on her stunt. And even she figured out it hadn't been worth the risk. She later made a statement to the press  advising others against a similar scheme. She said, "If it was with my dying breath, I would caution anyone against attempting the feat... I would sooner walk up to the mouth of a cannon, knowing it was going to blow me to pieces than make another trip over the Fall."

It was advice most people were never in need of. Except maybe "Lawn Chair Larry" and the "Mach Man."
Posted by Grant Davies