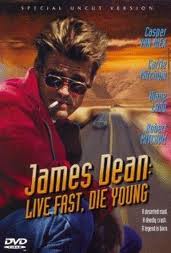 On this day (+2) in 1955, a young man, who had arrived in Hollywood just two years before, decided to celebrate the completion of his third movie.  Even though two of the movies had not yet been released, he had gained notoriety of a sort and some money.  And since he loved sports car racing and since he had some bucks, he bought a brand new grey Porsche ($7,000 circa 1955).

A few days later he and a stunt man pal decided to air out this new toy (nicknamed "The Little Bastard") on the way to a sports car event, west of Bakersfield.  They may have taken the air a bit too easily since by mid-afternoon they got a speeding ticket.  But they kept going.

About two hours later with the setting sun at his back, he sped into an intersection, and into a left turning vehicle, and into American Folklore.  His name was James Dean and he was killed instantly.  The fame he achieved in "East of Eden" became idolatry and legend with the release of "Rebel Without a Cause" and "Giant".

But one other of Dean's film appearances was never released to theaters.  It was a public service announcement, it was for safe driving. In that flick, Dean looked into the camera and said that even though he raced cars he felt safer on the race track than on the highway.  At the conclusion, he advised viewers to
drive safely - "the life you save might be mine."

To mark the date, stop by the Four Barrel Inn and have some high octane and olives. If there's some sweet thing there, gaze into her eyes, try to look vulnerable and caution that sometimes just when you think you've got your act together - something gets in your way.