Yeah, That's It.. The Dead Guys Did It 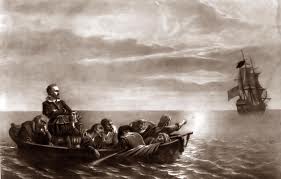 On this day (+1) in 1611, an explorer whose name appears on some of the most important properties in North America disappeared.  But he didn't fall off the end of the earth nor did he evaporate into some strange jungle.  Rather he just fell out of sight of his ship.


His name was Henry Hudson and he was a  free-lance explorer (a declining job classification just behind urban shepherd).   He had been working for British, Dutch and again British interests to find a northwest passage to the Indies.  In doing so he had found New York Harbor, the Hudson River, the Hudson Straits and Hudson's Bay. In his last voyage, an early winter laid ice around his vessel on Hudson's Bay.  The
crew, who did not share his sense of adventure, demanded they winter in.  Hudson was a pussycat so he agreed.

Over the winter, Hudson changed officers  to enforce his plan.  Those who were replaced incited the crew claiming that Hudson was giving food to favorites and kept an unfair share for himself.  Whether it was true or not we'll never know. We only know that the ice melted in early June and the ship was re-floated.  Hudson wanted to continue exploring.  The crew mutinied and set Hudson adrift in a longboat with his son and the sick.  He managed to trail the ship for a day until the winds picked up and the ship pulled away.  No one knows what became of Hudson (some suspect he died on an island near the straits).


Of the crew however, much  is  known. Relieved of Hank's leadership, they put in to land to hunt provisions.  They managed to insult some Indians and half of them were killed.  The rest straggled back to Europe.  There, the Admiralty Court asked them who were the mutineers so they might hang them. The survivors testimony was - "You're not gonna believe this, Your Lordship, but the mutineers were the very lads killed by the Indians."  The Court thanked them for their honesty and sent them home.


To celebrate stop by the location of the late lamented Hudson Burlesque in Union City then lift a stein at the Half Moon Inn.  Ask the bartender if he's got the obits so you can tell the boss whose fault it was for that problem at the office.