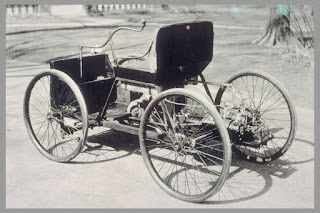 On this day in 1896, a man had a problem..and a solution. The solution was to take an ax and smash the brick wall of his garage to pieces so he could make a hole big enough to get his car out.

Well actually, it wasn't a garage because cars hadn't been invented yet. And come to think of it, it wasn't a car either, for the same reason. So as you can see, it was a rather unique problem.

The building in question was a shed, the vehicle was a "Quadricycle", and the guy with the problem was none other than Henry Ford, who some of you may have heard of.  Most of the time an ax isn't the tool engineers use to fix mistakes in simple math equations. But this time they simply forgot to measure the door to see if it was big enough for their invention to pass through, so they did what engineers do; they solved the problem.

They wanted to test drive the contraption, and after all the setbacks and solutions they already had endured in the previous months, taking the thing apart didn't seem to be a palatable option. After a smashing idea, and the problem solved, Henry sent his assistant, James Bishop, ahead to clear the path of little old ladies, easily frightened children, and skittish horses.

The Quadricyle had a metal frame, four bicycle wheels and a four-horsepower gasoline engine. It had a top speed of about twenty MPH and with the exception of one small glitch with a faulty spring, it went speeding along Detroit's Grand River Avenue in fine style.

Ford didn't invent the automobile - he saw others that inspired him to make a better one - but his was a dandy and it led to better things. He sold quite a few of them I'm told. In fact, it wouldn't be a stretch to say that Henry was the first guy to beat the doors down to get one.
Posted by Grant Davies