Saved by the Mud 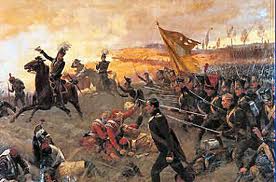 On this day in 1815, one of history's most fateful and certainly most studied battles occurred.  Napoleon Bonaparte, who had escaped from exile on Elba only a touch more than 100 days before, now stood at the head of a huge army seemingly about to overrun an equally huge force of allies from five nations.


If he succeeded all of Europe would fall under his control.  And, if there had been a Vegas, surely the Vegas line would have been take the little corporal and give the points. In fact Nappy's boys had routed the large Prussian force and then nearly panicked Wellington's forces just 36 hours before.


But just as his cavalry was about to turn Wellington's retreat into a massacre, a sudden thunderstorm deluged the roads and the plains. Wellington's men limped to entrenchments and Nappy's boys, under Marshall Ney regrouped. On the 18th, as the sun rose, brutally fierce testing of battle-lines began.  The carnage was so great that one British officer noted in his diary that he had never heard of a battle in which everyone (on both sides) died but this might be a first.


In mid-afternoon Nappy's boys began a new offensive and seemed to have the upper hand.  Suddenly the skies darkened again causing the French to pause.  At the same time the Scots Greys rode brazenly around their own lines and halted the offensive. Shortly before 7 p.m. the French tried one more time but suddenly the skies cleared, exposing the charging French to skirmish shooters in Wellington's forces.


The Battle of Waterloo was lost and Napoleon resigned in four days, heading for St. Helena and pension plan - version II.