On this day (-1) in 2007, an American hero, Rear Admiral Eugene Bennett Fluckey, passed away at the age of ninety-three. He was a Medal of Honor winner and this entire article could be about his remarkable life and times. But instead, this story will be about one of the most incredible adventures of the Second World War. As you might have guessed, the main character in this account was none other than Fluckey himself.

The date was July 23rd, 1945 and the war was winding down. Of course, no one knew that at the time. It was thought that an invasion of Japan would be needed to end the war. A horrific loss of human life on both sides was expected. Up til that time, there had been no ground combat operation on Japanese homeland soil. And as it turns out, the one in our story is the only one that would ever occur.

So it's a tad ironic that when it happened it would be sailors, not soldiers, who accomplished the successful feat. More ironic still, the vessel was a US submarine, and Eugene "Lucky" Fluckey was her skipper. The sub was the USS Barb, and she had had much success in sinking enemy ships during her service thus far. So much success that it only seemed fitting that she set her sights a little higher, perhaps even higher than a surface vessel. Maybe something up on dry land, perhaps a train or something.

You got it, "Lucky Fluckey" decided to bag a train, and the USS Barb remains the only sub ever to "sink" one.

It was Fluckey's last cruise and he wanted someone other than himself to go out with a bang. So on July 18th, in the early morning hours as he perused the map of  "Patience Bay", where they were sent to harass the enemy and generally fight the war, he spotted the rail line running right along the coast. So close you could almost smell the smokestack soot. He immediately knew that blowing up the rails was smack dab in the middle of his job description. What he didn't know was that his crew had an even better idea.

Since the trains were carrying supplies to fuel the Japanese war machine, perhaps even ammunition, blowing up the train itself became the topic of discussion. Fluckey knew that planting an explosive beneath the rails under the cover of darkness and setting it off remotely was one thing, but blowing up the train itself would require sailors to be up close and personal, and he decided that putting his men in that kind of danger was quite another thing.

Now Gene's luck really kicked in, in the person of crewman Billy Hatfield. Hatfield remembered that as a kid back home, he used to put walnuts between the rail and the tie, and let the weight of the passing train crack them open. He reasoned that an electrical pressure switch could be activated in the same manner, and when he told the Captain, work began on fabricating such a device out of things to be found aboard.

The rest of the details were worked out, digging tools were manufactured, training for the mission was completed and all that was left was to get the proper cloud cover so the operation could proceed undetected.

When the time came, the raiding party went ashore, and they were very lucky again. One man, John Markuson, was assigned to check out a nearby water tower. But when he began to climb it he realized that it was occupied by an enemy sentry. Luckily the guy was asleep. Markuson slowly climbed back down, alerted the others and the digging began in a slower, quieter manner.

The squad wasn't even back to the sub, which was sitting in just six feet of water, when a train appeared. They were paddling their craft back to her like men possessed when the train blew sky high. Fluckey had brought his boat incredibly close to shore with the men's safety in mind and was now able to pilot the sub slowly back to deeper water where she could submerge and escape.

Anything could have gone wrong at any time, but Fluckey was lucky. And so was his country. To have such  skill and bravery at the right place and time is lucky. But then again, considering all the other stories we've never heard about our guys during wartime, it may be more than luck. 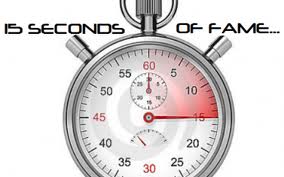 The idea and information for this story was submitted by regular reader Captain Kevin McCann USMC (Ret). This is the second time that the Captain has won our "15 Seconds of Fame" award for bringing a story to our attention that later becomes a published post. Congratulations "Cappy." Keep 'em coming!