He's Not Our Type 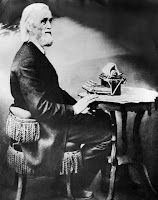 On this day (-3)  in 1867, a man brought to stage one, the evolution of an invention and instrument which would change human life in more ways than anyone at the time could guess.

The man's name was Christopher Latham Sholes and the device he was perfecting was the typewriter. It would provide women a steppingstone into "business." It would be the magic stone of hard-boiled police reporters and foreign correspondents (both real and imagined). It would be the antecedent of the word processor and the PC computer. As such it would be studied and blamed as a source of carpal tunnel syndrome, or RSI as it's now called.

But the typewriter could be none of these until it was functioning, and Sholes was having trouble. Once you started to type more than one letter at a time the hammers began to jam together as they approached the ribbon and paper. Try as he might Sholes couldn't prevent that jamming. So he tried what we might call ergo-mechanics. He decided to adjust the keyboard.

Some of his early keyboards were in alphabetical order. Sholes wondered if that put too many frequently used letters too close together. (Holy Vanna White! Could that be the answer?) He began shuffling the letters around. He even got a court reporter friend, Charles Weller, to design a phrase to test the typewriter and the hammers. Weller came up with - "Now is the time for all good men to come to the aid of the Party." (And you thought it was a famous quote.)

Anyway - as fast as Sholes moved the letters on the keyboard, his proto-typists (I just couldn't resist) adapted - typed faster - and jammed the hammers. Reportedly, Sholes studied the hand movements and set the letters in a very difficult format to slow down the typists and, thus, prevent jamming. Unfortunately, Sholes ran short of money and had to sell all his rights to the typewriter to the Remington Arms Company
(who we hear had some success with the device). The "difficult" keyboard however is unchanged after 145 years.

Thanks again to Mr. Cashin for lending his support to this site while the author has some time off. The above article was originally published as part of  "Cashin's Comments" and reprinted here by express permission of Arthur Cashin. Mr. Cashin is the Director of Floor Operations for UBS Financial Services and a regular markets commentator on CNBC.
Posted by Grant Davies