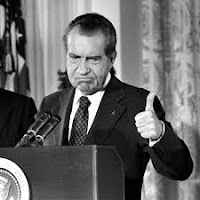 On this day in 1972 a chain of events began that ended in an unfortunate development for the US. It started  when U.S. President Richard Nixon embarked on what many have come to see as a historically positive trip to China, a country which had previously been closed to us but has since become one of our most reliable loan sharks.

Our head Dick (or dick head as some prefer) went there to open markets and friendship and ask for some long term loans if the country ever came out of its communist fog and earned enough to loan out. He was successful on all counts.

So what was the unfortunate development? He returned.

When he did that, he was able to start the "War On Drugs", which is a little like a war on lawn mowers. (Both things are inanimate thus neither can fight back, so you can always say you won even if it never ends and more people are cutting the grass than ever before.) After that, he decided he knew more about what people should earn and what their employers should pay them than the people themselves, so he started "Wage and Price Controls" to control inflation, thereby proving he knew the same amount about inflation that he knew about drug use.

He screwed up a lot of other stuff along the way and became known as the President who was so corrupt that he was offered a professorship at the Chicago College of Graft. (Okay, I made that part up.)

The precise timeline on all these events is probably wrong, but even on a site that's dedicated to precise time lines, it just wouldn't be fun to stick to the exact order. And history should be fun!

Anyway, they kicked his ass out of office for most of the wrong reasons, but because of all this, he became known as "Tricky Dick" by most people, but I just stick to my own nickname for him, "Whatta Dick."
Posted by Grant Davies