Editors note:
On this day in history (yes, this very day) we have a story from guest writer James Hinton, a history buff who knows some cool things about various subjects. He has previously been published on "Hankering for History" as well as his own site. We are happy to publish his submission about a largely unknown aspect of the life of one of most beautiful movie stars in history. Instead of frequently hopping from bed to bed as many sex symbols do, she invented "frequency hopping." Brains and beauty, what a concept.
Grant Davies 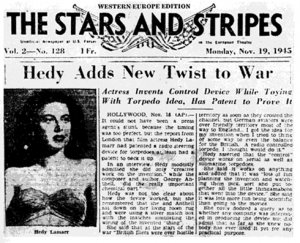 Cheeky Austrian Hedy Lamarr was a hit when MGM imported her iconic good looks and put them up on the silver screen. She starred as a seductive femme fatale alongside of actors like Clark Gable, James Stewart, and Spencer Tracy. Despite being tasked to sell war bonds, she made fourteen movies during WWII alone. What many people don’t realize is that movies aren't the only things Lamarr made during WWII.

Originally married to a fascist munitions manufacturer, the Jewish born, Catholic raised Lamarr had accompanied her husband to many meetings, learning the ins and outs of weapons manufacturing. Infuriated by German submarine attacks on passenger liners, she put her brilliant mind to work coming up with a solution.

Working alongside of composer George Antheil, Lamarr focused on inventing a means by which torpedoes could be controlled by radio. Such control had been attempted before, but always ran afoul of the same problem time and time again. Any signals controlling the torpedo could be jammed by the enemy. Lamarr’s solution was to rapidly cycle through multiple frequencies in a pattern stored aboard both the torpedo and the ship.

“Frequency hopping” was patented in August of 1942, with plenty of time for it to be adopted and put to use hunting German and Japanese ships. Unfortunately, the U.S. Navy, notoriously sensitive about the poor performance of its current torpedoes, refused to adopt the technology until the 1960s.
The technology did not languish, however. Starting with walkie-talkies, frequency hopping began to see use in radios, simultaneously securing communications against eavesdropping and against multiple conversations talking over one another using the same frequency. These techniques would eventually be adapted for computer communication, resulting in the Wi-Fi and Bluetooth technologies that are key to today’s digital revolution.

Hedy Lamarr passed away in 2000 at the age of 85. She was memorialized as a world-famous actress and sex symbol. As important as her contribution was to film, it is today's cell phones and wireless networks, however, that are her strongest legacy.

What Happens When Your Balloon is Too Lowe

On this day in 1861, in the cold pre-dawn air near Cincinnati, Thaddeus Lowe climbed into the basket of his large hot-air balloon, the Enterprise. Lowe was already famous in the aeronautic and scientific community as an expert on hot-air (ballooning that is).

But while he was an expert as an aeronaut, as a weatherman he was a schnook. About 20 minutes into the flight, he got picked up by gale force winds that ran nearly 80 mph. On this particular day, the jet stream had developed a sense of humor and swept Lowe (and balloon) all the way to South Carolina. What he thought was a military honor guard out to greet him was in fact a rebel patrol out to arrest him. (Lowe was unaware that the Civil War had started a few days earlier.)

Released when local scientists vouched for his credentials (and his eccentricity), Lowe headed north. But he was smitten by the image of spies in a balloon - peering down on rebel defenses.
He helped found and direct the "Aeronautic Corps. of the Army of the Potomac".

Assuming the wind was right, he or his associates would fly high over enemy lines in a tethered balloon and telegraph directions back down to the Union artillery. The corps made over 3000 such flights and were sometimes shot down. (Lowe was so valuable he was rescued by commandos when that happened to him.) While he survived the war intact, he is believed to have been shot at more often than anybody else in the whole war. Luckily, there were no ground to air missiles at the time.


Many thanks to Mr. Cashin and UBS Financial Services who graciously allow his historical musings to be republished on this site. To enjoy more of Art's posts simply click on "Cashin's Comments" in the label section on the sidebar.
Posted by Grant Davies 1 comment: 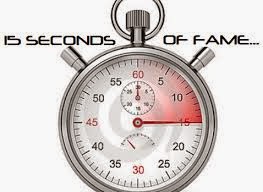 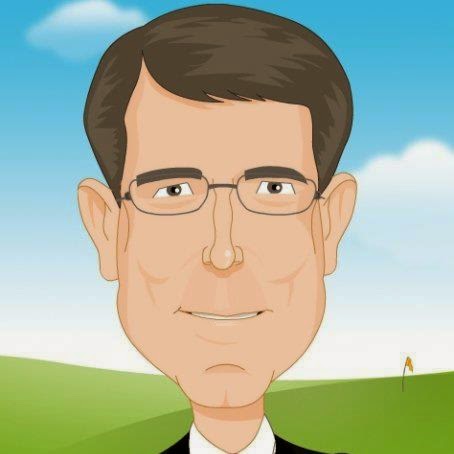 Kahn You Hear the Mongols Coming?

On this day in 1241 A.D., two great armies met to help decide the fate of western civilization. Okay, so you looked it up, there were three great armies. And, so you know it was in Middle Europe. And, the guys from the East (a chalk bet) were called the Mongols. The cheerleaders for the other guys called them the Mongol Horde. They were not a crowd favorite.

About 25 years before, their leader, a guy named Genghis Khan used their inherent horsemanship and ferocity to conquer most of China. Having quickly run out of rice and opponents they headed west - overrunning Samarkand and 14 other poetic principalities until they engulfed Southern Russia.

Here they heard about grain and riches further west and saddled up. Genghis Khan excused himself without a golden parachute and died. That left the team to his son, Ogotai. The kid saw himself as an administrator and thus hired a grandson of his father (and you thought “Days of Our Lives” was confusing). Anyway the kid's name (he was 32) was Batu Khan and he was the General Petraeus of his day.

So, having ravaged a thousand miles of enemies, Batu Khan found himself, this day, facing the cream of Middle European Knighthood in the Middle Ages. He stood on a small hilltop and looked out on the mass of the Polish and German armies carefully set to repel him. The town was called Liegnitz. The towns' folk, checking the form charts, thought a trip in the countryside was in order.

Thus on this day, Batu Khan's forces swept toward the cream of western chivalry. But before they engaged, the Mongols split and swept to the left and the right. The cream of Europa - probably muttering "What the hell is this!" turned to watch the Mongols speeding away on either side. The joy and laughter was short-lived. A third flank of Mongols now attacked the coalition which was facing the wrong way. The first two forces of Mongols turned to attack them leaving no secure front. The result was a massacre. And the cream of Europa soon became the curds and whey of Europa.

To mark the day, try not to get distracted when you think victory is at hand.